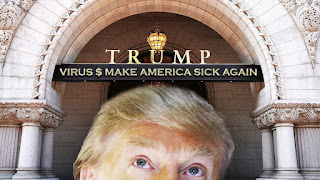 I'm not sure what all the uproar is about. This virus, or at least a large part of its power and ability to spread, was due to the Trump administration's mishandling of it, so why shouldn't he be allowed to print his name on the stimulus checks? In a way, you could say the stimulus checks are sponsored by Trump, bought and paid for by Duh Fuhrer Orange himself, with his colossal, catastrophic bumbling. These $1200 checks are probably his greatest accomplishment as president. All it cost him was 26,059 American lives and counting, which as a megalomaniac with narcissistic personality disorder, held no value to him anyway. So, yeah. Gee. Thanks for the $1200, Duh Fuhrer Orange. Yeah. I see you put your name right on it. Good job.
No comments:
Email ThisBlogThis!Share to TwitterShare to FacebookShare to Pinterest
Labels: mt headed things to be vindicated, political, trump, trump genocide, trump virus 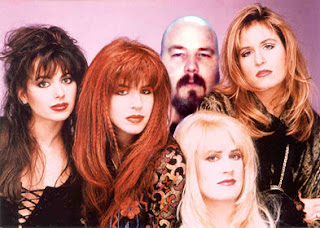 mtd pictured here with the Bangles before he got sacked for excessive tour bus flatulence - in my defense touring the US in the 80's didn't exactly lend itself to eating non-flatulence-producing fare, as Debbi Peterson, Bangles drummer, I'm sure, could corroborate.
No comments:
Email ThisBlogThis!Share to TwitterShare to FacebookShare to Pinterest
Labels: humor, mt headed things to be vindicated, mtd music, mtd trying to do

Happy Easter from Duh Fuhrer Orange, not only a deplorable imbecile, but now a mass murderer. Don't worry, nobody is saying he goes around murdering people. He just doesn't do anything about it. And why should he? It's not like he's the most powerful man in the world. He's just Duh Fuhrer Orange. Still, I have a sneaking suspicion he would do more to fight this pandemic if it seemed to be preying on rich folks with or without the last name Trump than just preying older folks and people of color. But, making a megalomaniac with narcissistic personality disorder care about anyone other than himself is an exercise in futility. Kind of like my mission to convince even one person maybe the Duh Fuhrer Orange koolaid doesn't taste that great. Ugh.
No comments:
Email ThisBlogThis!Share to TwitterShare to FacebookShare to Pinterest
Labels: mt headed things to be vindicated, trump, trump genocide, trump virus 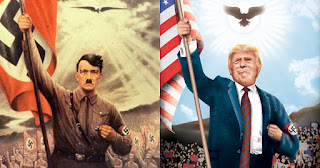 It's a little hard to have checks and balances when the president has the power to fire anyone who might call him on his potential wrongdoings. The sad thing is, he does this all in the open. And there's no public outcry. Definitely not from his adoring fans, who, I guess, are so used to the flavor of the Trump Koolaid, they just keep drinking it up. Or possibly they remain silent because they're afraid their heads might be the next to roll. All these firings, every one of them, is an act of a very self-conscious, paranoid, and seemingly guilty person. There's no doubt it's an abuse of power. Anyone who has the power to fire anyone who might challenge them or at the very least make them accountable for their actions, and then exercising that power, repeatedly, is basically taking a roundabout way to creating their own fascist state. So, I guess, after long-last, the comparisons to Hitler are complete, and nobody should blink an eye when we all give him a collective Hail, Trump! In fact, if you don't hail to Der Fuhrer Orange, you might get shot, or in this case, just vilified and fired, and at the very least you will have to go without the needed medical supplies to combat this virus. 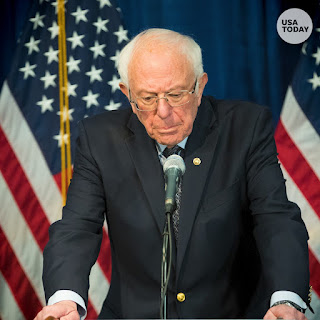 And there you have it. Bernie's out. That pretty much assures us four more years of Trump, assuming we even survive the first four years - and that's not even an exaggeration at this point. Wow. Just wow. I guess we could look on the bright side, if the old adage "Whatever doesn't kill you makes you stronger" is true, after eight years of Trump trying (or not trying - you probably have to care to try) to kill us, America will definitely be stronger. Deader, but stronger. Thanks for that, Mr. Orangeness. #trumpvirus #trumpgenocide
No comments:
Email ThisBlogThis!Share to TwitterShare to FacebookShare to Pinterest
Labels: mt headed things to be vindicated, political, trump, trump genocide, trump virus
Older Posts Home
Subscribe to: Posts (Atom)