I think it's time for a new segregation. Everyone who follows Orangy and refuse to social distance or wear a mask quarantine here, we'll call it Trumperica, FoxNewsia, or Little Flat-Earth. And everyone who follows disease specialists and doctors and want to at least try and slow this virus down by changing habits including social distancing and wearing a mask quarantine here, we'll call it Reason. 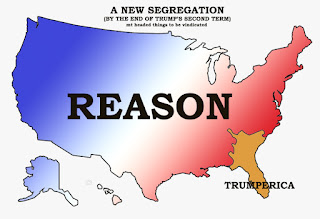 At first, the population and land will be about equal, but by the end of Trump's second term, as the map shows, Trump and his Trumpeteers will be whittled down to a small population riddled with various viruses, including Covid-19 and all its offshoot strands, along with all the defects that come with those, but, also, they will remain a very proud and freedom-laden people, violently possessive of their freedom to act in their worst interest, right down to the last one, who will probably be Orangy himself, who was hiding away in a bunker all along, social distancing the hell out of a crate of caviar and Twinkies.

With Reason being the last of the new segregated Americas standing, it'll only make sense to change its name back to America, after truly being made great again, after ridding itself of Orangy and all his dumbass ideals.
Email ThisBlogThis!Share to TwitterShare to FacebookShare to Pinterest
Labels: mt headed things to be vindicated, political, trump genocide, trump virus