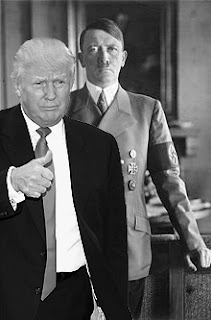 Just for schlitz and pretzels, do me a favor and read the following excerpt from this guy named Adolph Hitler's Wikipedia page. I'm sure you've heard of him. And yet, with the way these primaries have been going, I'm starting to wonder if many voting Americans have. Oh, and when you read it, do me yet another favor and substitute the word "Hitler" with "Trump". The rest of the context can be adapted fairly easily to our country and current political climate (ie. "Germany" with "America" and "Defeat in the World War" with "Terrorist attack on 9/11").

"Hitler's vitriolic beer hall speeches began attracting regular audiences. He became adept at using populist themes, including the use of scapegoats, who were blamed for his listeners' economic hardships. Psychiatrist Carl Jung commented in 1938 that Hitler is the "first man to tell every German what he has been thinking and feeling all along in his unconscious about German fate, especially since the defeat in the World War". Hitler used personal magnetism and an understanding of crowd psychology to advantage while engaged in public speaking. Historians have noted the hypnotic effect of his rhetoric on large audiences, and of his eyes in small groups. Roger Gill states, "His moving speeches captured the minds and hearts of a vast number of the German people: he virtually hypnotized his audiences." Alfons Heck, who joined the Hitler Youth during the war, later recalled: "We erupted into a frenzy of nationalistic pride that bordered on hysteria. For minutes on end, we shouted at the top of our lungs, with tears streaming down our faces: Sieg Heil, Sieg Heil, Sieg Heil! From that moment on, I belonged to Adolf Hitler body and soul.""

Thank you for indulging me in this fun little exercise. Feel free to follow this link and read some more about our furious fuhrer and maybe you too will see some other curious similarities to our new furious fuhrer. When you see history gearing up to repeat itself, it might be time to, well, take notice.
Email ThisBlogThis!Share to TwitterShare to FacebookShare to Pinterest
Labels: mt headed things to be vindicated