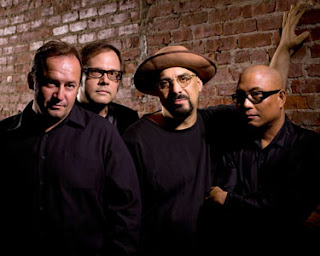 I just had one of the greatest nights of my life. Even though I was a little sleep-deprived, I decided to drive up to KC and go see the Smithereens live! I've loved the Smithereens for most of my life, since I was 14, when I bought their album, Green Thoughts, what a great album! An album both me and Ken used to play all the time. Anyway, the show was awesome. They sounded great - just like the albums. Pat DiNizio's singing was flawless and Jim Babjak's guitar playing was highly spirited, almost primal.

Afterwards, I met Pat and got all ga-ga. I shook his hand and told him Green Thoughts was a perfect album, not a bad track on it and easily one of my favorites of all-time. He apologized for not being able to play more songs from the album, as they had to cover all their stuff. I said, no, their set was great, a little from every album was definitely the way to go. During the show, they mentioned they were from New Jersey. I told him I was born in New Jersey. He asked where. I paused, and said Egg Harbor Township. He said, on the Ocean. I said, yeah, Ocean City. I told him his voice was great, distinct, and he was one of my favorite singers. I would have liked to chat more, but there were a lot of people, and I didn't want to monopolize his time. Besides that, I was running out of compliments. I told him to take care. He told me to "Do well." So, I have that going for me. I have to start doing well. Pat DiNizio said so. I was shaking when I walked away.

I think there's something transcendent, at least to me, about meeting famous people. I mean, I wouldn't care about meeting a lot of famous people. It's just the people who've inspired me. And the Smithereens music has definitely done that over the years. I know this post might sound silly or overly -I don't know- giddy, but that's what happens when you have a heart and you're not afraid to use it.
Email ThisBlogThis!Share to TwitterShare to FacebookShare to Pinterest
Labels: mtd music