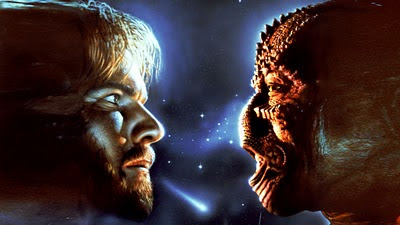 Enemy Mine should be required viewing for all children; for that matter, every human.

In the mid 80’s, when I was a wee lad, growing up in Salem, New Hampshire, I was always going over my best friend Ken’s apartment. Ken’s family was quite different from mine. For instance, Ken’s Mom kept their house spotless. Such a thing as isn’t usually a concern. However, in my case, it was a little unsettling, and made me somewhat apprehensive, for fear I might somehow upset the delicate balance of the place. That might say more about me than them. The other thing that comes to mind was his Dad’s interest in electronics, as far as the family entertainment system goes, complete with all the devices 80’s technology had to offer: TV, stereo, record player, loads of LP records, VCR, speakers for surround sound, and an extensive library of movies he taped off their many pay channels. Like the cleanliness, such a vast display of electronics was equally foreign to me. There must have been hundreds of these tapes, each one neatly labeled with 2, but usually 3 movies. I was only 10. I wasn’t the cultural sponge you see before you now. I had only a limited knowledge of movies. From TV and the occasional trip to the movie theater, as long as the movie didn’t have ghosts or anything supernatural for that matter, which were all obvious signs of the occult, according to my parents. All I knew for sure was there were tons; from familiar titles like Red Dawn to ones not so familiar like The Big Red One.

Every once a while, Ken’s family had movie night. I mean, why wouldn’t you, given all that equipment. During movie nights, Ken’s family did all they could to capture the essence of a real movie theater; the darkness, the surround sound, and the popcorn. With all that said - and man, would I love that same set-up today - I didn’t really care for these nights. Of course, I wouldn’t vocalize my discontent. Was it their fault I was crazy and would have preferred to spend my time at Ken’s doing important stuff like playing GI Joes or inventing the world’s next great board game? However, on one night in particular, all this changed, when movie night was to feature this movie called Enemy Mine.

To a 10 year-old, especially in the 80’s, back before our eyes were trained to spot inferior special effects, the power of Enemy Mine was undeniable. It hit me like a brick. To the degree, that I can honestly say no other lesson in my life, save for life itself, was able to reach into me and affect me more than Enemy Mine. A thousand hours in church, which is what my parents subjected me to growing up, never could have grabbed me up inside, and taught me to love my neighbor like two hours spent watching Enemy Mine. And that’s when you know a movie means something. 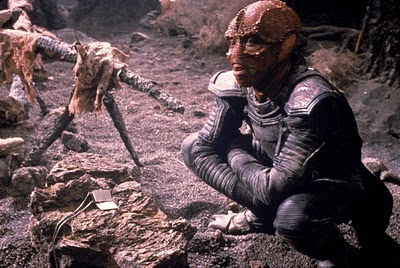 As I watch Enemy Mine today, I’m happy to report, I’m still very much taken in by this film. It is just as powerful. I ask myself to look past the outdated special effects to see what’s really going on. And it seems almost like a play to me, a heartfelt life lesson. There are so many scenes that stick with me.

Dennis Quaid and especially Louis Gossett Jr. make the artfully crafted dialogue come to life. Louis Gossett Jr., who plays a Drac (an alian race), beneath all that makeup, still manages to stir my heart in scene after scene. The two are mortal enemies stuck on an apparently deserted island, and have to rely on each other to survive. The spectrum of emotion, from acute hatred of one another to at times endearment, flows in every direction, and spills right off the screen. A truly masterful film.

Toward the latter part of the movie, there’s a particularly touching sequence that resonates with me, where Dennis Quaid’s character Davidge is raising a young Drac boy named Zammis. The boy is struggling to accept the physical differences between Davidge and himself. The sequence culminates in a powerful scene, where Bumper Robinson, who plays Zammis, tearfully says, “I wish I was not a Drac. I wish I had your face. I wish I had five fingers.” The moment is so powerful, so sincere and heart-wrenching, enhanced ten-fold by the films stirring score, and I’m blown away, without fail, every time I see it. I challenge you to watch the film for yourself, and dare try to walk away unscathed.

So, as you can kind of tell, I like Enemy Mine. And as far as I’m concerned, if I’m ever fortunate enough to have children, Enemy Mine will definitely be required viewing.