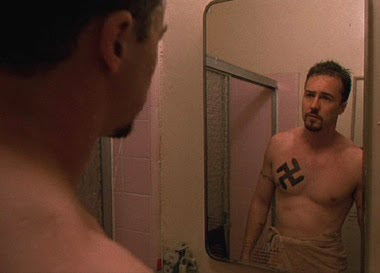 American History X is one of the most powerful movies I've ever seen. Edward Norton is completely mesmerizing as the lost soul turned Neo-Nazi urban legend in an off-white California community.

I first saw Norton in the movie, Primal Fear, starring Richard Gere. Though the film was a Gere vehicle, it was Norton who made the film what it was. His performance convinced me he was destined to be my generations Robert De Niro. He was that good!

Then, when American History X came along, it all but solidified this claim. Norton takes this already amazing character, and breathes life into him like no other contemporary actor could. Norton is vicious, vulnerable, heart-stopping, and intense beyond comprehension as the incredibly dynamic character, Derek Vinyard, as he goes from suburban white victim to local hero, or anti-hero.

Norton's character is obviously the centerpiece in this thriller. However, there are some other good performances in the film. Guy Torry, Ethan Suplee, Stacy Keach and Elliot Gould come to mind. Edward Furlong takes second billing, but I've never been a fan of Furlong, and in this film, he does nothing to change my feeling. This film belongs to Edward Norton and his performance alone, is enough to make the film great!

David McKenna, who wrote this script as a film student, struck creative gold with this masterpiece. McKenna injects us right into this seedy world of explosive race wars, and isn't long before you, too, are immersed in the middle of it. With Edward Norton as the embodiment of McKenna's anti-hero, giving the monstrous Derek Vinyard a charismatic jolt, you can't help but choose a side. On the outside looking in, of course you know what's right and what's wrong. And yet, the way the story is crafted and Tony Kaye directs it, you can't help but feel empathy for almost every character, no matter how terrible they may seem. All signs of a masterful film.

American History X will get your blood pumping, your stomach turning, and you won't be the same afterward! Yes, it's that good!
Email ThisBlogThis!Share to TwitterShare to FacebookShare to Pinterest
Labels: mtd movies