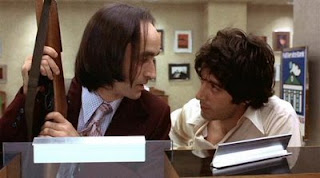 Dog Day Afternoon is an amazing movie. Like many of my movie favorites, Dog Day Afternoon was made in the 70’s, during that limbo period between the big studio days into the independent film days.

Al Pacino is incredible in this film, a fireball of emotion and passion. His character is smart, cunning, vulnerable, ferocious, and heavily flawed. He is the quintessential anti-hero.

I won’t get into plot or things like that, just the raw emotion, and what the film evokes out of me, an avid movie goer and student of film. I will say, it is a crime film. And it is low budget. And it is an undeniably awesome movie.

Pacino’s character has to walk such a nerve-racking tight rope in this film, it is impossible to turn away. Something in particular that makes things hard on him, as a bank robber, is every character in the movie is very human. Not a typical Hollywood movie. The realness of his surroundings, makes him have to work that much harder.

For instance, his partner in crime, played brilliantly by John Cazale, isn’t exactly a prime candidate for this line of work. Neither is Sonny, Pacino’s character, but he is trying to make do.

I would have to say virtually every character in this movie is opposing Pacino in some way. And it makes for a great movie. In the forefront, is his main foil Charles Durning, who plays the negotiator. Durning is impeccable. Oafish at times, and frantic, and highly human.

There are so many things about this movie that break tradition. It isn’t a simple crime drama to say the least. If it was, it wouldn’t be among my favorites. I’d love to discuss more, but I wouldn’t want to give anything away. All I’ll say is watch for Chris Sarandon’s character.

Some requirements in watching this film would have to be an open mind. If you’re looking for a John Wayne or Charles Bronson movie formula here, then keep searching. This movie is unpredictable and nuts and I absolutely love it!
Email ThisBlogThis!Share to TwitterShare to FacebookShare to Pinterest
Labels: mtd movies