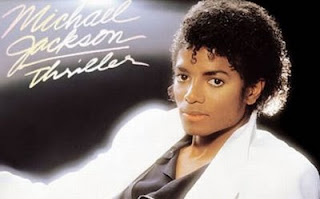 A few days ago, I went to check my email, and stumbled on the news that Michael Jackson was dead at 50, and instantly I felt a stream of emotions; first shock, then disbelief, and now ultimately sadness. It’s a strange sort of sadness. I guess, because it’s growing. And I’m afraid it hasn’t reached its low-point. And that’s why I decided to write this, for selfish reasons and therapeutic reasons, to finally put away the sorrow I feel for this sad and enigmatic man.

When I was a boy, growing up in the 80’s, there was no entertainer, nobody, who could touch what Michael Jackson was doing to the world. He was everywhere. And his album, Thriller, was on fire.

One day, my mom decided to let me and my big brother each buy one secular, or non-Christian album. I’m not sure why this change of heart, but we weren’t about to pass it up. We weren’t super sheltered, at least it didn’t seem like it to me and my brother. We heard music on the radio, and on Friday Night Videos. Dave, my brother, got to see this new channel called MTV, whenever he went to his friend, Paul’s house, up the street. Paul also had magazine cut-outs of naked women plastered all over his bedroom walls. I guess you could say the Paul from our neighborhood was spreading a different sort of gospel than the Paul from the Bible. To an 8 year old kid, I was all ears, and eyes, whenever I was permitted to tag along to Paul’s.

So anyway, my brother and I had a pretty good idea what album each of us would pick. I grabbed Culture Club’s Kissing To Be Clever, I don’t know, I guess cuz I’m gay. No, I like boobies way too much to be gay. It wasn’t even like that. Boy George, during the early 80’s, wasn’t really even about gayness. He was just cool and witty. The fact that he dressed up like a girl had nothing to do with it. It was the 80’s and lot’s of people were dressing up like girls… To prove my point, Boy George was even on an episode of the A-Team, and you can’t get more mannish than that. It was the 80’s, that should be enough said.

Anyway, I’d sit in front of my parent’s record player and listen to my new music. I didn’t really understand a lot of the Culture Club album. KTBC is kind of weird. Of course I liked “Do you Really Want to Hurt Me” and “Time (Clock of the Heart)”, but after that, there was a lot of songs about white boys and black boys doing stuff, and so I alternated with my brother’s Thriller album. After all, I only had the two 33’s to listen to, unless I wanted to grab a record from my father’s box of gospel quartet albums, something I tried from time to time but always instantly regretted. Later on, my brother bought the 45’s “Pac-Man Fever” and Weird Al’s “Eat It” and so I had a little bit more variety.

Now, when I listened to Thriller it was undeniable, how immensely perfect and hip it was, an utter masterpiece. Every song on it was a potential hit. It had “Beat It”, “Billie Jean”, “Thriller”, and “PYT” and my favorite, “Human Nature”. I was bummed when I saw the video for “Say Say Say”, the song Michael Jackson did with Paul McCartney, and it wasn’t on Thriller. Instead, Thriller had “The Girl Is Mine”, which seemed like pretty weak song to me at the time. I eventually bought the “Say Say Say” single.

In the next few years, Michael Jackson mania would only get crazier. He started doing the sequin glove and moonwalk thing and soon everyone and their brother was trying to moonwalk. I would moon walk sometimes down the alleyway behind my house. Prince did a similar move and I’d try to mix that in too. Along with the moonwalk, people in my neighborhood were starting to break dance, these are all white people mind you. They’d be doing the Worm or whatever. It was nuts. And I would say Michael Jackson started all of this with his moonwalk.

Besides his music and dance moves, Michael Jackson was already turning heads with his eccentric behavior. Nobody could believe when he wasn’t singing, he talked with that tiny little whispery, almost effeminate voice. But nobody was about to make fun. He was the king of cool. And so we simply made concessions. So what if he carried Emanuel Lewis around like he was a little kid and had a pet Monkey. Like I said before, it was the 80’s. Eccentricities were the norm. Besides, Michael Jackson often tempered his strangeness with a little arm-candy in the shape of Brooke Shields by his side. Now, I doubt anybody ever thought anything happened between the two of them, it’s still pretty cool. Then again, who knew? At that point, everyone was in awe of this incredible singer and dancer. We were all just in plain awe.

However, like with every superstar or beloved figure, there’s often an equally ferocious backlash coming full-speed around the corner. And for Michael Jackson, it was no different. The first couple things that happened, that marked the end was Eddie Murphy impersonating him in various stand-up specials. If there was a cooler black dude alive back then, it was Eddie Murphy. And that wasn’t good. Then, came the whole Pepsi Commercial thing where Michael Jackson’s hair caught on fire. It’s really hard to maintain your coolness and hipness when your jheri curl is aflame. Then, for Michael’s next album, in an effort to answer his critics about being soft, he named his album Bad, and with the first single and video, tried like hell to get us to believe he was indeed bad.

Finally, what really caused his rising star to wane was this skin-lightening thing. Nobody on the planet could conceive why somebody would want to do this, especially the most recognizable black man on the planet. His prior alterations had seemingly perfected his look, just in time for the Thriller album. But when Bad came out, we could see that he hadn’t stopped there. No. He was far from done.

And hence, came the next stage of Michael’s career. It would come to be known by many, but said by so few, namely me, called the “What the heck is he doing?” phase of Michael Jackson’s career. This was basically the early 90’s and beyond, where was watched in horror as Michael Jackson changed from black to almost transparent, human to skeleton, and peculiar entertainer to alleged child molester.

I’m not sure if anyone knows what happened to Michael Jackson: least of all, him. Did he just disappear before all our eyes? Did he go inside himself? I’ve read that victims of abuse often do just that. They might resurface with a split personality or some other defense mechanism, or they might transform themselves or denature themselves from their natural selves.

There are so many theories as to why Michael Jackson felt the need to alter his appearance. One theory is that he wanted to escape the similarities between the man in the mirror and his father, his life-long abuser and tormenter. If that was his desire, than he surely changed himself enough by 1982. Some say he idolized Diana Ross and wanted to look as close to her as he could. Well, if that was the case, he accomplished that around 1984. Why would he progress even further? Why would he continue to lighten his skin to alabaster and whittle his nose down to nothingness? There is simply no excuse as to why he progressed any further than this other than a mental fixation. Similar to anorexia, he had to have had some sort of compulsion. This is plain. Frankly, I have to wonder how any of these doctors could feed into this obvious illness. The same might ultimately be said about the drugs in his system at the time of his death, all doctor prescribed.

A theory of mine, about Michael Jackson’s peculiarity would have to do with his fame and extreme scrutiny at such an early age. This was a boy that was utterly robbed of his childhood. From as early as age 7, Michael Jackson, was no longer permitted to be a child. He was a professional performer driven to perfection by a man who should have been his father and not his slave-driving manager. When fame struck, he wasn’t even able to go out and play in public. As the frontman for the Jackson 5, the intense pressure to come through rested squarely on his shoulders. No one should have to answer to the amount of pressure he had, especially not a child of 10 years old. It’s no wonder he escaped further inside himself, suffering with such deep loneliness that he resorted to finding companionship in animals like a rat he named Ben, who he’d meet with late at night, until his father killed it.

This warped reality became Michael Jackson’s prison. Where he was trapped for the rest of his life, an extreme case of arrested development. Even as an adult, his private attire was more along the lines of Mickey Mouse t-shirts than anything else. When fame as an adult intensified, there was a need for Jackson’s hardness or manliness to make an appearance. This was against his nature. And so he over compensated with the crotch grabbing and bizarre primal screams.

The real Michael Jackson was gentle. Still the 7 year old child, sneaking out of bed to play with his only friend, a little rat. This is why I tend to believe Jackson’s innocence when it comes to all these child abuse allegations. I truly believe these children represented the little friends and playmates he never had. I don’t doubt it when he talks about it in interviews, how he served them cookies and milk and had sleep-overs. I tend to think Jackson wasn’t a sexual person. And this is why I also have trouble believing his relationships with Lisa Marie Presley or Debbie Rowe. If anything, the latter represented a mere means to an end, a way to have children of his own. Something, I’m sure, he always wanted to do, be a father. I don’t doubt him being a good father. Even with a few lapses in judgment. With Jackson, fatherhood, I’m sure, often took a backseat to his childish, playful nature, which, in all honesty, isn’t the worst trait in the world for a father.

Michael Jackson was an incredible, iconic force in the 80’s. And as a child of the 80’s, his presence was ever-present during a large portion of my life. I might appear as though I’m romanticizing MJ, in light of his passing, but I stand by everything I wrote. Michael Jackson was the biggest, most powerful performer during the 1980s. His life was a gift to many of us, but in many ways a curse for himself, a tormented child superstar never given the chance to grow up. Ultimately, I’m sure this sadness I feel for him will dissipate over time, but I won’t soon forget the lessons of his tragic life, it’s only too bad he had to live that tormented life for me to learn it.