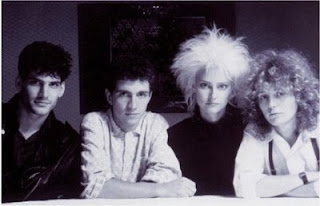 Hello and welcome! I’m writing a series of articles to shed light on some obscure music I think everyone should check out. I’m into all kinds of music but my favorite is 80’s music. I LOVE IT!!!

This article is devoted to critically acclaimed but commercially pigeon-holed group, Til Tuesday. Til Tuesday featured future star Aimee Mann, but for some unknown reason, was never able to clear the hurdle of one-hit-wonder status due to their smash hit 80’s classic “Voices Carry”.

When I was a young lad growing up in the 80’s I can honestly say that some 80’s singers scared me. Two female singers in particular come to mind, Annie Lennox of the Eurythmics and Aimee Mann of Til Tuesday. In both cases, their haircuts were incredibly jarring at first glance, but beyond that, it might have been Aimee Mann’s big-eyed unyielding stare that freaked me out the most.

Regardless of the Aimee Mann’s ominous eyes, like everyone on the planet in 1985, I was drawn in and can admit that I too screamed along whenever “Voices Carry” came on MTV or the radio.

However, now that I’m older, and have observed a few things, I have no doubt that in some cases, America, whether it was the DJ’s doing or preempted moves on the record labels behalf, but certain groups just didn’t seem to be allowed to progress beyond one-hit-wonder.

A few years back, I heard the song that would change everything I had previously thought about Til Tuesday, and that was the song “Coming Up Close”. This song was amazing the very first time I heard it. And I find it strange that I didn’t get to hear it the first time around in 1992. It was so dreamy and soul-stirring, with Mann and her way with words and delivery, I couldn’t help but listen.

After hearing “Coming Up Close”, on a whim, I decided to buy their greatest hits album. And believe you me, I soon realized why this band was so critically acclaimed. Every song was incredibly mesmerizing and addictive. Sure, it had 80’s written all over it, which is a good thing, but it was way better than that, almost as if it was before its time. And so, beyond what I might have thought of Aimee Mann’s appearance, her music made me realize one thing, and that she is an amazing songwriter.

I challenge anyone to do what I did. Give this 80’s group another look and I’m sure you won’t be disappointed.
Email ThisBlogThis!Share to TwitterShare to FacebookShare to Pinterest
Labels: mtd music