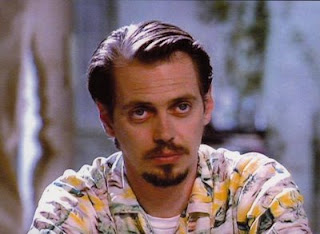 I’ve written a couple music and movie articles, now I’d like to try something a little different. The mtd actors series will feature my favorite actors. Generally, I like the character actors the best, which tend to be a little obscure, but many of my favorite actors have turned into big stars, Clive Owen comes to mind, so some might seem like no-brainers.

My first actor is going to be the great Steve Buscemi. I’ve always loved this guy. Incredibly intense actor. His signature voice is unmistakable and absolutely demands your attention. His unique look, like an emaciated rat with a thyroid condition. But still, he is definitely one of my favorites. No doubt about it.

The first time I saw Steve Buscemi was in 1993 in that groundbreaking Quentin Tarantino film, Reservoir Dogs. As Mr. Pink, he absolutely steals the show. He’s in full weasely bloom, right from the beginning, (well sort of the beginning, with Tarantino’s nonlinear storytelling) when he surprises the crap out of everyone else in the makeshift crime crew, when he refuses to throw-in for the tip. His character proves to be very resourceful, given the mess they’re all in, and Steve Buscemi acts it perfectly.

During the next few years, I saw him in a couple minor roles, but Buscemi didn’t hit it big again until he landed in Fargo, another crime movie, gone busto. In this movie, I think Buscemi takes the weasel and unscrupulousness up a notch. Not quite as empathetic as Mr. Pink. Basically just a real scoundrel. Yeah, loved him in this movie. Incredible performances all around in this Coen Brothers classic.

Steve Buscemi had pretty much solidified his niche in Hollywood after Fargo. And even expanded into writing and directing his own films. The first of these is the next film I’d like to cover, Trees Lounge. This is an adorable film. Buscemi’s character is still kind of jerky. But this guy is no criminal. He’s just, well, basically a loser, in an incredibly awful rut. You really feel for him in this movie and want him to succeed but man, does he make it difficult for himself.

Steve Buscemi is always busy. And he’s been in tons of movies since Trees Lounge. These three were my favorites. Here are some more, with asterisks to show what I thought of the movie as well as Buscemi’s performance (I only included Movies I’ve seen).


Thanks for reading. Keep checking for future installments on my favorite music, movies, actors, athletes, and opinions.
Email ThisBlogThis!Share to TwitterShare to FacebookShare to Pinterest
Labels: mtd actors